The Collection supports an active, on-site program of tablet conservation. It also offers conservation free of charge for institutions and individuals whose tablets can be shown to have been acquired legitimately. 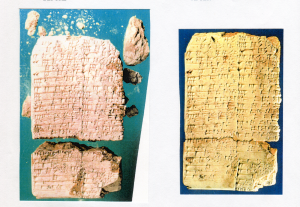 The salts in clay artifacts often migrate to the surface in a humid environment such as that of New Haven, causing deterioration ranging from flaking to disintegration. To remove the incrustations and stabilize affected tablets, the Collection has developed a highly effective treatment protocol involving firing, soaking, cleaning, and repairing. In addition, tablets with hardened superficial dirt require baking before they can be safely cleaned to reveal their inscriptions. Some tablets, deemed stable in their unbaked state, are left unfired to enable scholars to carry out scientific analyses of the clay, an important new research direction in which the Collection is taking a leadership role.

A manual of conservation protocols written by Ulla Kasten, Associate Curator emerita and Museum Editor, was translated into Arabic for use by museum professionals in Syria and elsewhere in the Middle East.

The Yale Babylonian Collection is catalogued in the Yale Peabody Museum's Collections Database.