Housing over 40,000 objects, with particularly strong holdings in cuneiform tablets and cylinder and stamp seals, the Yale Babylonian Collection is one of the foremost collections of ancient West Asian artifacts in North America. Curators, staff, students, and visiting scholars have devoted considerable time over the past 100 years to the identification, description, and analysis of objects in the collection. While records were initially completed by hand in ledger books or on filing cards, the introduction of technology to museums allowed for the digital documentation of objects. Two successive NEH grants 1988-1992 and 1993-1996, allowed the completion of an electronic catalogue in FileMaker Pro of all inscribed objects. In 2017, the data from the FileMaker Pro database was transferred the Yale Peabody Museum’s collection management system. Online access through the Yale Peabody Museum collection portal opens the collection up to museum audiences, scholars who are unable to travel, and other digital research projects. The cuneiform objects are digitized according to the highest international standards and data is freely shared with other digitial cuneiform projects, including the Cuneiform Digital Library Initiative (CDLI) and others. 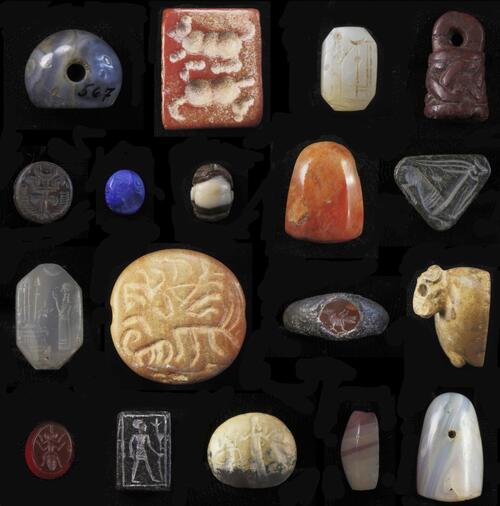 Digitizing the Seals in the Yale Babylonian Collection

The Yale Babylonian Collection contains some 4,000 cylinder and stamp seals ranging from Prehistoric to Sasanian periods, as well as 10,000 or more clay documents with seal impressions, and several hundred modern impressions of seals in collections worldwide. Together these objects provide an unparalleled source of information about seal iconography, seal carving, and sealing practices in ancient West Asia. The material in the collection of the YBC ranges from prehistoric to Sassanian periods, and, in addition to Mesopotamia proper, includes objects from Iran, Egypt, the Mediterranean, Anatolia, and the Indus Valley. The Yale Babylonian Collection Seal Digitization Project aims to image and document the ca. 4,000 cylinder and stamp seals in the collection as well as more than 10,000 ancient impressions made on clay tablets. This project will make all seals and seal impressions globally accessible through the Peabody Museum of Natural History’s collection database. Work is being supported by a grant from the Council on Library and Information Resources and employs one postdoctoral associate and several graduate and undergraduate students.

While several volumes devoted to the seal and seal impressions in the YBC have been published over the years, the full collection of material has yet to be made widely available. Early efforts to catalogue the collection resulted in the publication of Briggs Buchanan (Early Near Eastern Seals in the Yale Babylonian Collection, 1981) and Hans Henning van der Osten (Ancient Oriental Seals in the Collection of Mr. Edward T. Newell, 1934), with additional references to seal impressions appearing in various tablet publications, but much of the material in the collection remains unpublished or is in need of further documentation.* Moreover, many earlier publications of seals focused on reproducing the scenes that were engraved into the stones, often through black and white photographs or drawings of the seals impression alone. By contrast, the YBC’s Seal Digitization Project will provide full visual documentation of seals and seal impressions in the collection—using multiple technologies to photographs all sides of the seals. Photographs will be presented together with information about the size and weight of the seals, their material and iconography, and their application to clay surfaces and interaction with cuneiform texts.

The YBC Seal Digitization Project aims to photograph all cylinder and stamp seals in the collection and to share these images online. Efforts are underway to test various kinds of equipment used to document cylinder seals, stamp seals, and seal impressions; YBC staff and students are cleaning, measuring, creating impressions for, and photographing seals; and the project meets regularly with an advisory board and other seal documentation initiatives worldwide. Future planned work includes the standardization of terminology, the creation of a dedicated search portal, and the documentation of ancient and modern impressions. In addition to documenting the collection at Yale, the YBC is engaged in efforts to assist documentation efforts in other collections by developing best practices and documentation kits. Work on the seals in our collection is regularly featured on our Instagram account @yalebabyloniancollection.

*PDFs of many publication are available online at https://babylonian-collection.yale.edu/publications

The YBC Seal Digitization Project is led by:

Additional members of the project include:

Anikó Bezur, Director of the Technical Studies Laboratory at Yale Institute for the Preservation of Cultural Heritage

Alice Knaff, Postdoctoral Associate at Yale Institute for the Preservation of Cultural Heritage

Members of the YBC Seal Advisory Board:

Yale students involved in the Seal Digitization Project include:

We are grateful to the following individuals for additional advice: