Numerous configurations were proposed and discussed for housing the Babylonian Collection in the new Sterling Memorial Library (SML) building. The 1925 plans, for instance, called for a suite of six rooms, with additional space in the basement for a kiln and work area, as well as for secure storage. The sketch shown here for the basement room is probably by Andrew Keogh, University Librarian, who consulted with Babylonian Collection curators throughout the process.

By 1929, it was decided that the Collection’s home would be on the third floor, where it remains to this day. A major engineering concern was the combined weight of the drawers once they were filled with tablets. Structural reinforcements were specially incorporated into the floor of the future tablet room, as the library was being built. The tablets were the first items to be moved into the new building, ahead of the books. 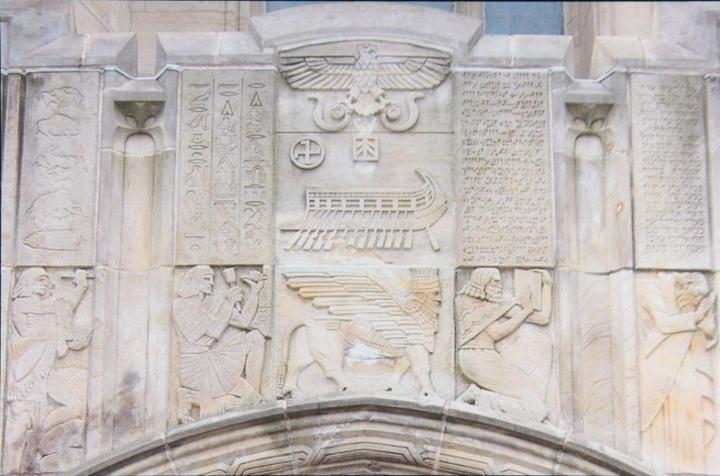 According to the Yale University Library Gazette of October 1930, the “main entrance is symbolic of the ancient civilizations, based upon written records,” with the more venerable on the left side.  Originally, there was to have been a panel with Latin; but as we see from this letter, by the spring of 1929 the decision was made to replace it with an inscription in Babylonian.

Raymond Dougherty, the second Curator of the Babylonian Collection, selected a highly suitable passage.  In the 7th century B.C.E., the Assyrian king Assurbanipal assembled the largest, most comprehensive library of tablets known from the ancient world.  Dougherty chose a typical colophon to tablets from the library, in which the scribe assures us that he has carefully copied and edited his text and now wishes the god Nabu, patron of writing, to look with favor upon the library and the king.

Supplied by Dougherty with a copy of the text, the sculptor skillfully carved the cuneiform signs.  Occasionally, Yale students enrolled in Akkadian classes have been assigned the inscription as a sight-reading exercise.

The stained and painted glass decorations made by G.

Owen  Bonawit and his firm were important elements in the Collegiate Gothic style chosen for the library and other Yale buildings constructed in the 1930s. A Committee on Decoration drew up lists of subjects and provided illustrations taken from published sources.  For each theme or discipline, the Committee aimed to select what it deemed the most characteristic images.

Bonawit made ten medallions for the Babylonian Collection windows,

which are among the few that still adorn the library rooms for which they were made.  All but one depict details from the stone wall reliefs of the Assyrian palaces of the 9th to 7th centuries B.C.E. 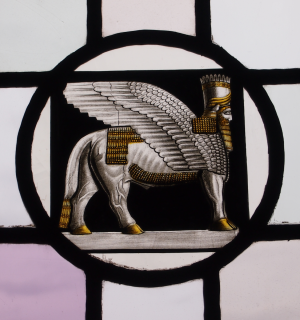