Home » Women at the Dawn of History 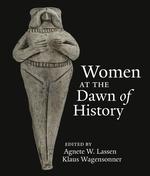 This lavishly illustrated volume gives a voice to women who lived millennia ago in Mesopotamia, present-day Iraq, Syria and Turkey, and explores their roles, representations and contributions to society.

Tens of thousands of cuneiform texts, monumental sculptures, and images on terracotta reliefs and cylinder seals cast light on the fates of women at the dawn of history, from queens to female slaves. In the patriarchal world of ancient Mesopotamia, women were often represented in their relation to men—as mothers, daughters, or wives—giving the impression that a woman’s place was in the home. But, as we explore in this volume, they were also authors and scholars, astute business-women, sources of expressions of eroticism, priestesses with access to major gods and goddesses, and regents who exercised power on behalf of kingdoms, states, and empires.

This volume accompanies an exhibition at the Babylonian Collection in the Sterling Memorial Library, showcasing artefacts and texts relating to women, many never exhibited or published before.

Agnete W. Lassen is associate curator of the Yale Babylonian Collection at the Yale Peabody Museum of Natural History. Klaus Wagensonner is a post-doctoral researcher at Yale University.