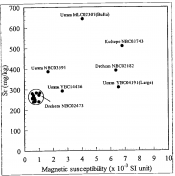 Interactions between Man and the Environment in Mesopotamia

The Yale Babylonian Collection is an active participant in the international project “Interactions between Man and the Environment in Mesopotamia,” under the auspices of the Research Institute for Humanity and Nature, Kyoto, Japan.  The Collection is the first participant in the project to permit sampling of cuneiform tablets for Neutron Activation and X-Ray Diffraction Analysis, as well as Magnetic Susceptibility measurement. For preliminary publication of the results (example on left), see Scienze dell’Antichità 17 (2011) 379-426. Two final publications appeared in 2014 and 2015. 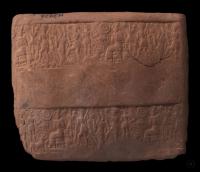 Continuing earlier efforts to catalog the Yale Babylonian Collection, staff are currently photographing all objects in the collection. This work is made possible by grants from the National Endowment for the Humanities (NEH) and the Council on Library & Information Resources (CLIR). The digitization of the Yale Babylonian Collection involves the photography of circa 40,000 tablets and fragments; the photography of circa 4,000 cylinder and stamp seals. All photographs are made freely available online and can be downloaded through the Yale Peabody Museum’s collection portal. See Current Projects for additional information. Left: Old Assyrian envelope (NBC 3938).

The Yale Babylonian Collection is a partner in the Cuneiform Commentaries Project (CCP), which aims to produce online a complete corpus of reliable editions, translations, and notes on the nearly 900 known Babylonian and Assyrian commentaries, today scattered among the world’s museums. For further information, see the project’s website at http://ccp.yale.edu. Left: Neo-Babylonian commentary (NBC 6197). 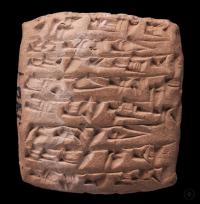 The Collection is participating in a project designed to source the clay of Old Assyrian documents using X-ray fluorescence analysis. The results may shed new light on social and economic networks in Anatolia and beyond in the early second millennium B.C.E. Left: Old Assyrian account of silver (NBC 1907).